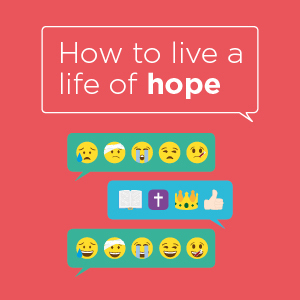 How to Live a Life of Hope

1 Peter is the first of two letters in the Bible written by the apostle Peter, one of Jesus’ first followers and a key leader in the early church. The original recipients were Christians living in what is now northern Turkey and was then part of the Roman Empire.

His readers must have been enduring some persecution as this is one of the main concerns of the letter. It was not the official violence that was soon to come but it still would have been disturbing: scorn or shame for leaving the religion of their family or owner, or accusations of a lack of patriotism and loyalty to Caesar.

Peter knew what it was to experience opposition and he lived with a sense that following Jesus would eventually cost him his life, as it did when the Emperor Nero had him executed.

Peter’s letter is full of hope even in the midst of trouble: it focuses on God (only 1 John has a higher proportion of mentions of God’s name), and on the promised new creation. Peter is certain that Jesus will return because He has risen from the dead – just as He promised. Peter hadn’t believed that promise at first but He wasn’t going to make the same mistake again!

The good news of what God has done and is going to do for us determines how we think and act now, and Peter addresses a number of situations this applies to. Followers of Jesus imitate His life as we suffer with an anticipation of glory.

Peter begins his letter by describing the hope that all Christians have, in a jumble of phrases which reference eternity past, the Old Testament, the life of Jesus, and the future. It’s a big picture that’s meant to stir our praise to God and our gratitude to Jesus for doing all this for us.

Verse 13 starts with the word therefore. Peter instructs us that our behavior and conduct needs to be fashioned by Christ and his values, rather than this present world; but to do this we need to be very aware of the truths he has outlined in the preceding verses.

We’re living in times that can feel uncertain, unpredictable and unstable. Think politics, Zimbabwe, Nice, Turkey, Germany. As Christians even if the world is falling apart around us we’re to be those who are characterised by hope.

God calls us to live out our lives like Jesus, who perfectly demonstrated our need to live as sojourners and subjects. Belonging to God, living for Him, and being subject to normal life around us. As we do this, God uses us, and draws people to put their trust in Him.

Peter encourages us to respect and honour our earthly bosses even when they mistreat us. We should imitate Christ's example by bearing up and not letting sin gain a foothold in our lives.

Peter shows that Christian marriage is a beautiful relationship between a man and woman who love each other and put their hope in God. The mutual respect assumed here was unprecedented in the ancient world and shows how the gospel gives value to all of us.

Christians are told by Peter to always have a ready answer for the hope they have in Christ. But what does that look like and how do we express it in modern society? Ultimately, Peter sees the hope we have as outshining any fear or power in this world.

The theme's in this passage are centred on the fact that many believers were shocked at the kickback they were receiving from unbelievers following their conversion. Peter makes it clear that God uses these tribulations to His advantage in helping to purify their faith, and fashion them to be more Christ-like.

Peter tells us to humble ourselves, resist the devil and allow God to establish us in His grace.

Godly leadership is a gift from Jesus, the Good Shepherd who gave His life for His sheep, who cares for us through leadership, and who will bring us to be with Him forever.